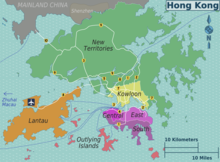 Hong Kong (香港; “Fragrant Harbour”), officially known as Hong Kong Special Administrative Region of thePeople’s Republic of China, is a city on the southern coast of China at the Pearl River Estuary and the South China Sea.[9] Hong Kong is well known for its expansive skyline, deep natural harbour and extreme population density(some seven million inhabitants over a land mass of 1,104 km2 (426 sq mi)).[10] The current population of Hong Kong comprises 93.6% ethnic Chinese.[5] A major part of Hong Kong’s Cantonese-speaking majority originated from the neighbouring Canton province (now Guangdong),[11] from where skilled labour fled after the communist government took over China in 1949 and subsequently purged its population during the 1960s.[12][13][14][15]

After China’s defeat in the First Opium War (1839–42) against the British Empire, Hong Kong became a British colony with the perpetual cession of Hong Kong Island, followed by Kowloon Peninsula in 1860 and a 99-year lease of the New Territories in 1898. After it was occupied by Japan during the Second World War (1941–45), the British resumed control until 30 June 1997. As a result of the negotiations between China and Britain, Hong Kong was transferred to the People’s Republic of China under the 1984 Sino-British Joint Declaration. The city became China’s first Special Administrative Region on 1 July 1997 under the principle of “one country, two systems“.[16][17]

Towards the late 1970s, Hong Kong became established as a major entrepôt between the world and China. The city has developed into a major global trade hub and financial centre, and is regarded as a world city and one of the eightAlpha+ cities. It ranked fifth on the 2014 Global Cities Index after New York City, London, Tokyo and Paris.[18] The city has one of the highest per capita incomes in the world, and the most severe income inequality among the advanced economies.[6] It has a high Human Development Index and is ranked highly in the Global Competitiveness Report.[19] Hong Kong is the third most important financial centre after New York and London.[20] The service economy, characterised by low taxation and free trade, has been regarded as one of the world’s most laissez-faireeconomic policies, and the currency, the Hong Kong dollar, is the 13th most traded currency in the world.[21]

Limited flat land created a necessity for dense infrastructure, and the city became a centre of modern architecture, earning Hong Kong the title of the world’s most vertical city.[22][23] Hong Kong has a highly developed public transportation network and 90 percent of the population, the highest rate in the world, relies on mass transit by road or rail.[24][25] Air pollution remains a serious problem.[26] Loose emissions standards have resulted in a high level ofatmospheric particulates.[27]